Aronia, also known as chokeberry, is native to South Dakota and the Midwest.  It grows from a shrub and is in the Rosaceae family. It is most commonly found in wet woods and swamps.  Aronia berries contain higher levels of antioxidants, ployphenois, and anthocyanins than cranberries, blueberries, grapes, and most other fruits. Studies have shown that antioxidants help reduce the risk for cancer, heart disease, inflammation, diabetes, bacterial infections and neurological diseases in humans. They also slow the aging process.

Antioxidant levels in food are measured by Oxygen Radical Absorbance Capacity (ORAC). ORAC measures the overall antioxidant power of a food or supplement. USDA research shows Aronia berries has one of the highest antioxidant content of any fruits. 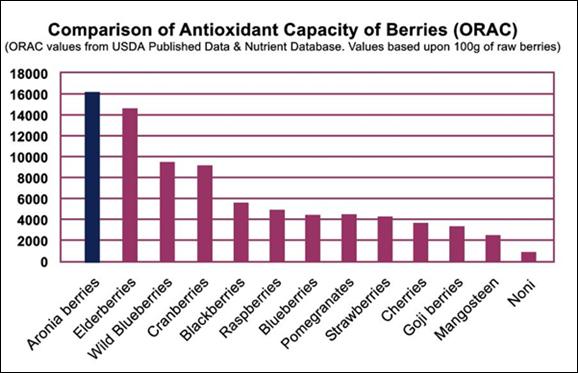 Anti-Cancer Effects
In a 2004 study, the effects of grape, aronia, and bilberry extracts were examined in preventing the growth of colon cancer. The study found that while all the extracts inhibited the growth of the cancer cells, aronia had the strongest effect [1].  Another study found that aronia extract helped to reduce cell damage in relation to breast cancer.  The author’s concluded it to have protective qualities in people experiencing breast cancer [2].

Anti-Diabetic Effects
Research seems to support the anti-diabetic effects of aronia. A 2015 study in rats found that an aronia extract helped to boost the immune system and reduce inflammation related to diabetes.

A 2012 study, looking at insulin-resistant rats, found that an aronia extract fought insulin resistance on several levels. This result potentially makes it an effective aid in preventing diabetes from developing.

A 2016 study found that blood glucose levels and obesity were positively affected by aronia.

Organ Health
A 2016 study looked at the effects of aronia fruit juice in rats with liver damage. Researchers found that the juice reduced the severity and symptoms of the liver damage.

A similar 2017 study also found aronia juice to have protective effects against liver damage in rats. The study’s authors suggested the effect might be due to the antioxidant activity of the aronia.

Another rodent study from 2017 found that aronia juice helped to reduce the severity of symptoms in rats with damaged stomach linings. The study suggested that, in this case, the benefits of the aronia might be due to it boosting mucus production, as well as its ability to combat oxidative stress.

Artery and Blood Vessel Health
A 2015 study found that aronia could protect against coronary artery disease. Aronia was thought to protect against the plaque that develops inside the arteries. Both the aronia and bilberry extracts helped to relax the tissue, which would allow for improved blood flow. This is important, as many cardiovascular diseases result in a hardening of the arteries and reduced ability for the blood vessels to relax. This can also mean that the blood pressure drops.

Out of the three extracts tested, aronia had the most powerful effects. The researchers concluded that the extracts could have significant benefits in treating vascular disease.

A 2013 study supported these findings. Researchers found that aronia was effective at reducing blood pressure, and might help combat high blood pressure in the arteries.