The Incredible Vitamin B17

B17 or Laetril has also been known as the Cancer Vitamin
In some way or other, Cancer has affected most of us. We know of someone, a family member or close friend, who has it or has died from it. Yet, we should not fear cancer, but understand and respect it enough to KNOW how to deal with it. Today, we will take a closer look at an old, unorthodox, but safe treatment that many have used for cancer.

Laetrile or Amygdalin B17
In 1924, Laetrile was synthesized from amygdalin and promoted as a cancer treatment. Amygdalin contains glucose, benzaldehyde, and cyanide. Cyanide is believed to be the active cancer-killing ingredient in Laetrile. Laetrile is found in high concentration in the seeds of many fruits, such as apricot, plum, peach, and cherry pits, apple seeds, quince, and almonds.

From some perspectives, cancer is considered a vitamin deficiency disease. As in the case of scurvy, rickets, pellagra, and beriberi, vitamin deficiencies do cause serious life threatening diseases. When the necessary deficient nutrient is provided, then the disease can be prevented and even reversed.   The view that cancer is a deficiency disease of B17 has been held by several researchers. This is in part based on studies done in people groups that either do not develop cancer or have a very low rate. One example is the Hunzas who consume a considerable amount of apricot kernels. [1]

The book, Cancer: Disease of Civilization, by Vilhjalmur Stefansson, is a compilation of data on “primitive” peoples of both hemispheres that support the theory that cancer and diet are linked.  According to Stefansson, cancer is considered to be a disease of civilization. The fact is that cancer diminishes as people decline on the “civilization” scale. [2]  One important factor we need to consider in the diet of civilization, is the dire lack of Vitamin B17. Our progress in agriculture and food processing has nearly removed  B17. Do you know of anyone that eats apple seeds, apricot, or peach pits?

Opposition
In 1970s, when America’s war on cancer was in full force, Sloan Kettering was regarded as one of the world’s leading cancer research centers. Yet, the Board of Directors swept positive findings about Laetrile under the rug when it became unprofitable. In 1977, one science writer, Ralph Moss came forward with the truth about what turned out to be one of the most reprehensible cover-ups in the history of cancer research. This story is recounted in a new documentary Second Opinion: Laetrile at Sloan Kettering. As an insider, Moss reveals the cover-up on Laetrile. Yet, even today, Laetrile is not a popular treatment for cancer in America.

The Chemical Action of Laetrile

When I went to the School of Natural Healing in Utah to get my Master Herbalist certification, one of the subjects we studied was cancer and the chemical process by which B17 destroys cancer cells.  The diagram below shows how this is done.

The first example is the body with cancer cells. What happens is selective toxicity.  This is where when there are cancer cells, the enzyme Beta-Glucosidase converts the active properties into a toxic poison that kills the cancer cells.  The second example is with a normal cell where there are plenty of Rhodanese protecting enzymes.  This converts the active properties into B12.  For more detailed information visit: How B17 Kills Cancer. 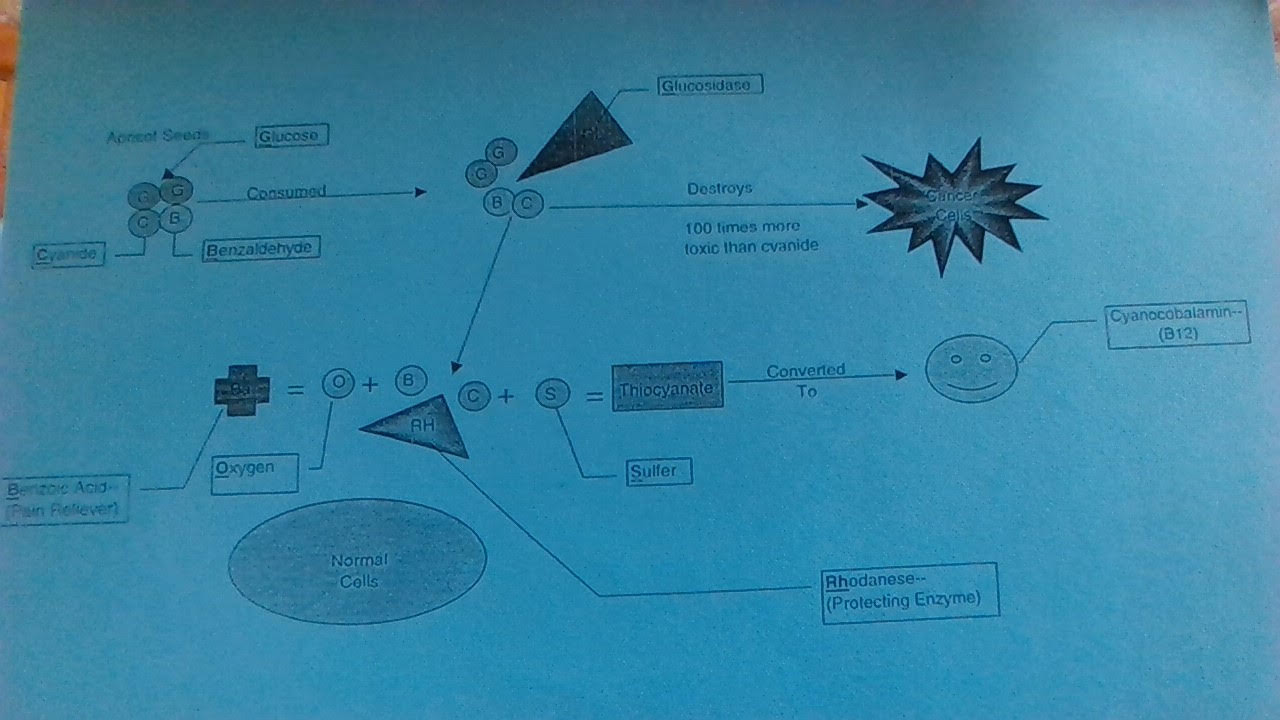 At Herbs4You, we carry high quality bitter apricot seeds grown in California.  We all need this vitamin as part of our regular diet. If you have any questions, please feel free to contact me.